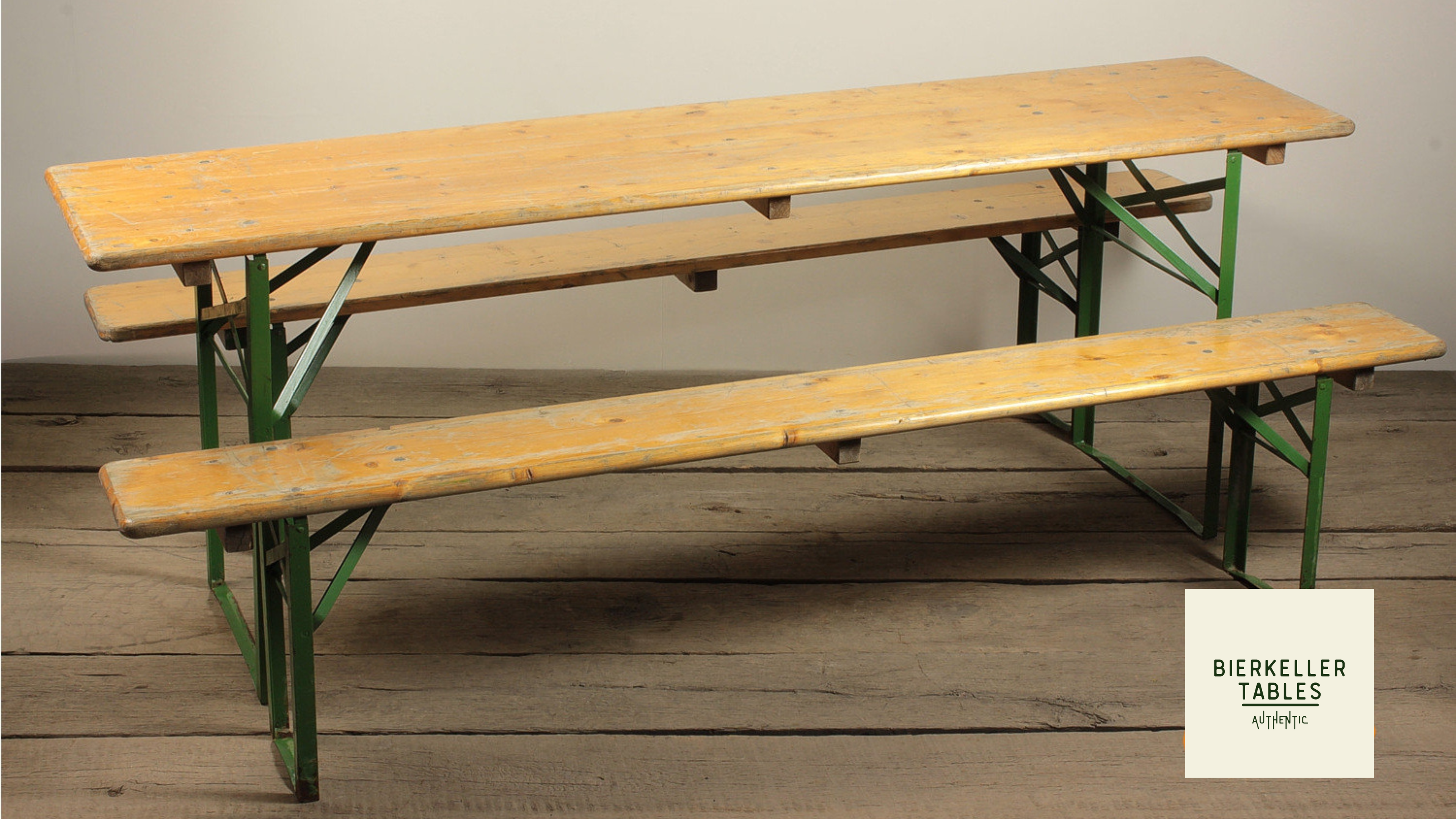 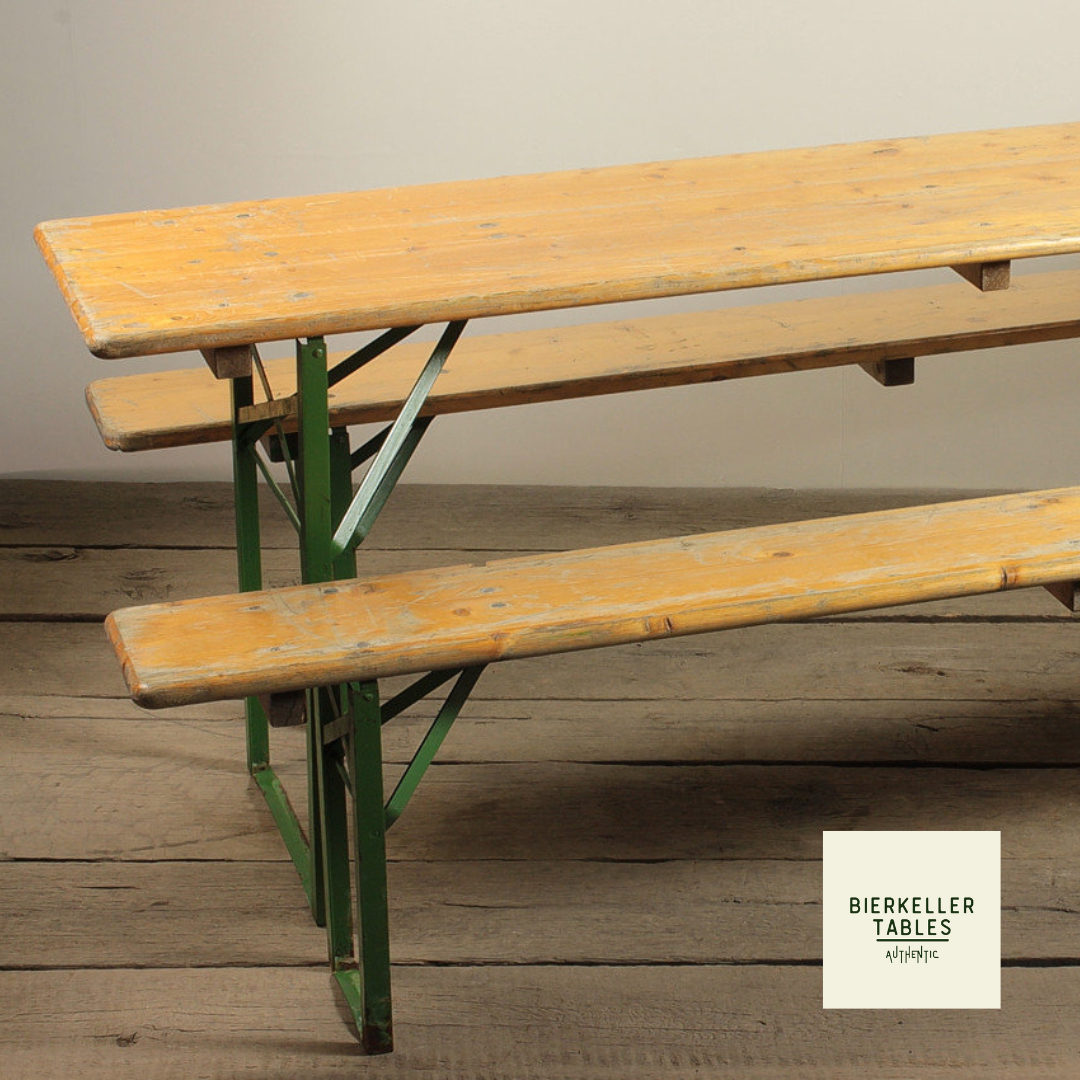 Made from solid German Oak, strong steel and expert craftsmanship, our Bierkeller Tables are guaranteed to last a long time and take any amount of table dancing!

A chilly edge begins to adorn the August nights, and weary travellers return from their summer vacations. In most countries, all eyes are now turning towards the office, and the inevitable tedium of the commute.

Thankfully, Germany has the perfect antidote.

Proving once and for all that the Bavarians host the greatest party in town, Oktoberfest is the ultimate remedy to the end-of-summer blues.

Running from the end of September until the first weekend in October, this traditional folk festival is now a world-famous pilgrimage. For the last two-hundred years people have been flocking to Oktoberfest for one thing: fun. And lots of it.

By now, Oktoberfest has become a term associated with beer, partying, and Bierkeller Tables, but what does the festival actually involve?

Nobody knows exactly why this annual autumn festival came to involve its iconic mixture of activities. The original celebrations involved a mixture of horse racing, musical celebrations, and drinking, all of which was to honour the marriage of a Bavarian king to his German princess. History suggests that the party was such a success that the locals decided to make a regular thing of it, and the beloved Oktoberfest was born.

With its brightly lit beer tents, oom-pah bands, and lashings of leiderhosen, Oktoberfest celebrates five key aspects of Bavarian culture: music, dancing, eating, drinking, and community spirit. Nobody at Oktoberfest parties alone. Seated together at Bierkeller Tables, Oktoberfest plunges both locals and visitors into a maelstrom of group activity.

Bierkeller Tables are almost as famous as the festival itself. The image of the intrepid reveller climbing aboard to take on the challenge of ‘ex’ is an enduring one. Not for the feint hearted, ‘ex’ involves drinking an entire stein of beer whilst the crowds cheer.

Central to Oktoberfest is food. Schweinebraten (roast pork), würstl (sausage), schweinshaxe (roasted ham), and käsespätzle (cheese noodles), are all traditional features of this epic autumn feast. These are served like a buffet, as partygoers move from one bierkeller table to another and socialise.

It’s all in the moves

At the heart of the revelry, however, is the dancing. Lubricated by plenty of beer, this is where traditional song and instruments take over the tents. In Germany, expect processions of thousands of consumed, leiderhosen-clad dancers. In the replica festivals that are held in pubs and bars all around the world, the polka and schlager can be heard spilling from windows and doors.

Outside the borders of Bavaria, holding Oktoberfest celebrations is increasingly common, and many towns and cities are getting in on the action. With craft beers becoming more popular than ever, it’s also becoming easier to hold an authentic Oktoberfest.

For the host, only a few key ingredients are needed. A hog roast or sausages are needed to fill the guest’s stomachs, whilst a range of beers and ales will get everyone dancing. Bierkeller tables help to add an authentic German vibe to the proceedings, whilst encouraging people to break the ice and delve into the party spirit. As for the costumes, who doesn’t look great in traditional Bavarian dress?

Oktoberfest has earned itself a reputation for being an unapologetic party. It is a celebration of community and the joy of the feast. Through this historic festival, Bavaria reminds us that sometimes there is more to life than the daily commute wheatgerm smoothies. Sometimes, everyone deserves to forget the nine-to-five, and let their hair down, German-style.

Good use of space at this indie Pizza take out ...

These tables have been here at this Cafe in Amsterdam for over 10 years and they are still going strong #beirkellertables #salvage #beergardenfurniture #amsterdam #coffeeshop #cafefurniture ...

Not our tables here but shows what can be done with this type of table - Great for events of all kinds in a weather conditions ☀️🌧⛅️ #beirkellertables #eventplanning #weddingtables #harrogatecarnival ...